Commemorative Medal of the Reign of King Albert I

The Commemorative Medal of the Reign of King Albert I (Dutch: Herinneringsmedaille aan de Regeerperiode van Albert I) was a Belgian military medal established on 17 February 1962 to commemorate the reign of Albert I of Belgium.  It was awarded to serving members of the Belgian Armed Forces and to veterans of the service who served honorably between 18 December 1909 and 18 February 1934.

Commemorative Medal of the Reign of King Albert I 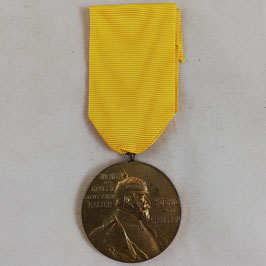 The Kaiser Wilhelm Memorial Medal also known as the Centenary Medal (German: Kaiser-Wilhelm-Erinnerungsmedaille Zentenarmedaille) was established on March 22, 1897 by Wilhelm II on the occasion of the 100th Birthday of his grandfather, Emperor Wilhelm I.

The medal was awarded by Prussia to state and university officials, as well as all military officers, non-commissioned officers and enlisted personnel, which were actively serving in army, navy and Schutztruppe. Medals were also awarded to the surviving veterans of the First Schleswig War, Second Schleswig War, Austro-Prussian War, and the Franco-Prussian War. 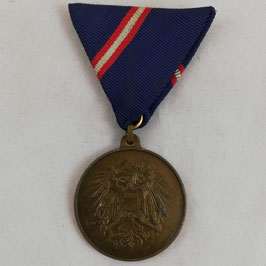 The Military Service Medal (German: Wehrdienstmedaille) is a military medal awarded to members of the Military of Austria. It is awarded in three classes: gold, silver, and bronze depending on length of recognized service. Established in 1963, the medal was originally called the Military Commemorative Service Medal (Wehrdiensterinnerungsmedaille). The name was changed to its current name in 1989. 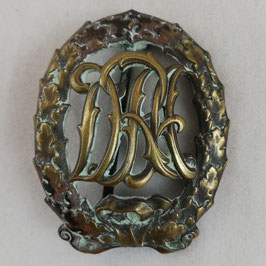 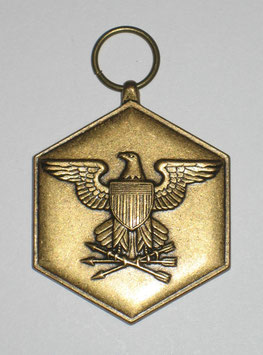 The Commendation Medal is a mid-level United States military decoration which is presented for sustained acts of heroism or meritorious service. For valorous actions in direct contact with an enemy, but of a lesser degree than required for the award of the Bronze Star Medal, a Commendation Medal with "V" Device or Combat "V" (Navy/Marine) is awarded; the "V" device may be authorized for wear on the service and suspension ribbon of the medal to denote valor. Each branch of theUnited States Armed Forces issues its own version of the Commendation Medal, with a fifth version existing for acts of joint military service performed under the Department of Defense. 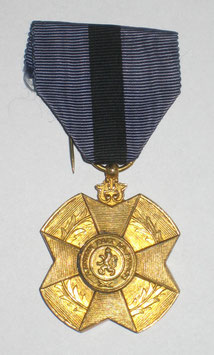 The Order of Leopold II is an order of Belgium and is named in honor of King Léopold II. The decoration was established on 24 August 1900 by Leopold II as king of the Congo Free State and was in 1908, upon Congo being handed over to Belgium, incorporated into the Belgian awards system. The order is awarded for meritorious service to the Sovereign of Belgium, and as a token of his personal goodwill. It can be awarded to both Belgians and foreigners. The Order of Leopold II is awarded to military personnel on the basis of their length of service, with the years of training counting for half and issued in five classes and three medals, the bronze one is the lowest. 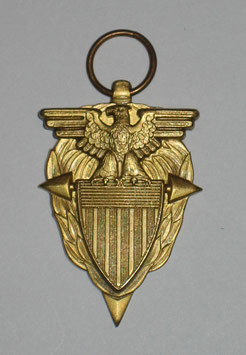 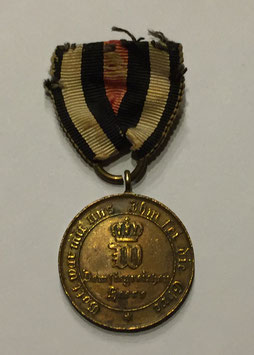 The medal for combatants was manufactured from captured bronze cannon barrels. The obverse shows the crowned Royal cypher of William I over the inscription Dem siegreichen Heere (To the victorious army). Inscribed around the edge is Gott war mit uns, Ihm sei die Ehre (God was with us, to Him be the glory). The reverse shows a cross with rays between the four arms. In the center of the cross is a laurel wreath surrounding the dates 1870 and 1871. On the edge of the coin is inscribed 'AUS EROBERTEM GESCHUETZ' (From conquered cannon).

The Antarctica Service Medal (ASM) was established by the United States Congress on July 7, 1960 under Public Law 600 of the 86th Congress.  The medal was intended as a military award to replace several commemorative awards which had been issued for previous Antarctica expeditions from 1928 to 1941.  The Antarctica Service Medal is considered an award of the United States Armed Forces, issued in the name of the U.S. Department of Defense, and is authorized for wear on active duty uniforms. The medal may also be awarded to U.S. civilians, but after the initial award, the civilian may only wear the miniature or the lapel pin depending on the occasion.

The criteria for award of the Air Force Good Conduct medal are as follows: It is awarded to Air Force enlisted personnel during a three-year period of active military service or for a one-year period of service during a time of war. Airmen awarded this medal must have had character and efficiency ratings of excellent or higher throughout the qualifying period including time spent in attendance at service schools, and there must have been no convictions of court martial or non-judicial punishment during this period.

The Combat Readiness Medal is given as a service award by an Air Force Major Headquarters. In many cases, those receiving the award have also qualified for the Air Medal, the Aerial Achievement Medal or the Nuclear Deterrence Operations Service Medal. For aeronautically rated Air Force officers and enlisted aircrew personnel, it is not to receive one or both of the aforementioned flight crew medals simultaneous with the Combat Readiness Medal. 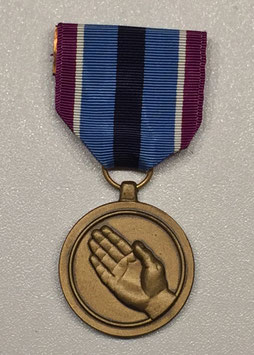 The Humanitarian Service Medal (HSM) is a military service medal of the United States Armed Forces which was created on January 19, 1977 by President Gerald Ford under Executive Order 11965. This medal is awarded to any member of the United States military (including Reserve and National Guard members) who distinguish themselves by meritorious participation in specified military acts or operations of a humanitarian nature.  This medal is presented as an individual service medal. The activities in which the Humanitarian Service Medal may be authorized are designated by the United States Department of Defense. Such activities include natural disaster relief, evacuation of non-combatants from a hostile area, or humanitarian support to refugees.

The Korean Service Medal (KSM) is a military award for service in the United States Armed Forces and was created in November 1950 by executive order of President Harry Truman. The Korean Service Medal is the primary United States military award for participation in the Korean War and is awarded to any U.S. service member, who performed duty in the Republic of Korea, between June 27, 1950 and July 27, 1954. 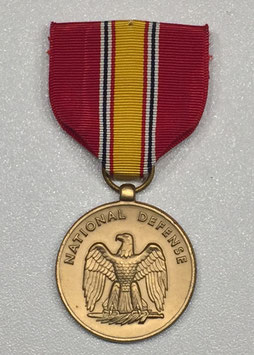 The National Defense Service Medal is a service medal of the United States Armed Forces established by President Dwight D. Eisenhower in 1953. The medal was first intended to be a "blanket campaign medal" awarded to service members who served honorably during a designated time period of which a "national emergency" had been declared during a time of war or conflict. It may also be issued to active military members for any other period that the Secretary of Defense designates.  Currently, the National Defense Service Medal is the oldest service medal in use by the United States Armed Forces. The oldest continuously issued combat medal is the Medal of Honor.

The Medal for Humane Action is a military award of the United States armed forces which was created by an act (63 Stat. 477) of the United States Congress on July 20, 1949.  The medal recognizes those military service members who performed extended duty in support of the Berlin Airlift.  The medal is based on the design of the Berlin Airlift Device.  This medal was created for the single purpose of recognizing service during a single action (the Berlin Airlift) and was never issued again.  The specific criteria for receipt of this award was established by Executive Order 10325, "Regulations governing the award of the Medal for Humane Action," of February 7, 1952.  To be awarded the Medal for Humane Action a service member was required to have performed over 120 days of duty, within the geographical boundary of Berlin, with such duty being in support of the Berlin Airlift between the dates of June 26, 1948 and September 30, 1949.  Posthumous award may be made to any person who lost his life while, or as a direct result of, participating in the Berlin airlift, without regard to the length of such service, if otherwise eligible. 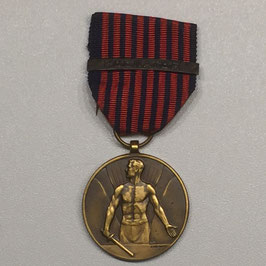 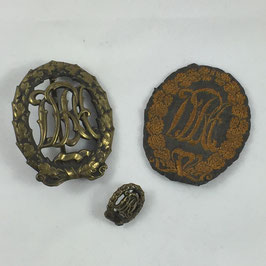 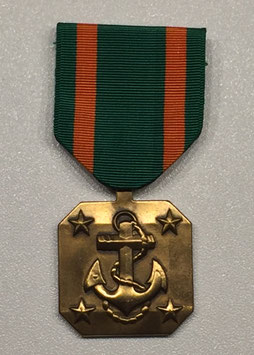 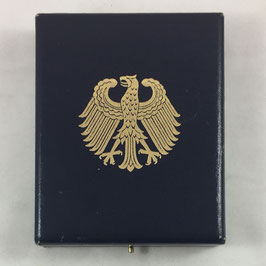 The Army Commendation Medal is awarded to any member of the Armed Forces of the United States other than General Officers who, while serving in any capacity with the U.S. Army after December 6, 1941, distinguished themselves by heroism, meritorious achievement or meritorious service. The medal may be awarded to a member of another branch of the U.S. Armed Forces or of a friendly foreign nation who, after June 1, 1962, distinguishes themselves by an act of heroism, extraordinary achievement, or significant meritorious service which has been of mutual benefit to the friendly nation and the United States.  Good condition!

The Army Good Conduct Medal was established by Executive Order 8809, dated 28 June 1941, and authorized the award for soldiers completing three years active service after that date.

The criteria were amended by Executive Order 9323, dated 31 March 1943, to authorize the award for candidates having three years of service after 7 December 1941 or one year of service while the United States is at war.

Officially, the Good Conduct Medal is awarded for exemplary behavior, efficiency, and fidelity in active Federal Military service. It is awarded on a selective basis to each soldier who distinguishes himself/herself from among his/her fellow soldiers by their exemplary conduct, efficiency, and fidelity throughout a specified period of continuous enlisted active Federal military service. Qualifying periods of service include each three years completed after 27 August 1940 or, for first award only, upon completion of at least one year upon termination of service if separated prior to three years. Also for the first award only, for those individuals who died before completing one year of active Federal military service if the death occurred in the line of duty. The immediate commander must approve the award and the award must be announced in permanent orders.

Medal is in mint condition, still in it's original box.