Document grouping of the Hagel-family, father and son

Document grouping consisting of the birth- and death certificate of Nagel Paul - a WW1-veteran.  His 'Militärpaß' is included, nicely stamped with a lot of entries - full war veteran.  He was part of the '10. Batterie IV Abtlg. 1. F.-A. 12' and received the Iron Cross 2nd class.  Other documents are refering to his son, Hagel Paul Rudolf.  His birth- and death certificate are also included.  He died on 5.4.1944 in the german army hospital of Attendorn.  Some pictures of the family/Rudolf Nagel are included.

Document grouping of the Hagel-family, father and son

'Soldbuch' and slipcase are in good condition.  Booklet was issued to 'Funck', part of Mecklenb. Reichswehr Inft. Regiment Nr. 17 2. Kompagnie.  Few entries but with matchting slipcase.

The 'Militärpaß' was issued to 'Alfred Lehmann °7.2.1898' on 10.6.15 and has many entries. He started his career in the 'Unteroffizierschule Weissenfels 1. Kompagnie'.  He received the Iron Cross 2nd Class (6.11.18) with other awards.  He served at the Somme and Saint Quentin.  Interesting booklet!

The 'Militärpaß' was issued to '? Merz °21.11.1886'.  He joined the army on 2.8.14.  He was transfered four times to other units.  He received the Iron Cross 2nd Class and other awards.  He saw action in France and was stationed on the eastern front.  Fair to good condition. 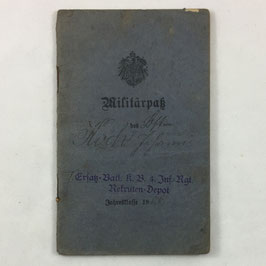 Unissued and in good condition 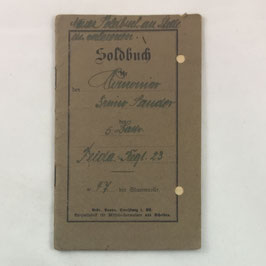 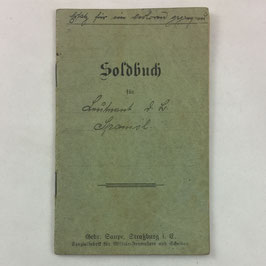