Shell converterd into a lamp socket.  Marked with 'Reims'.

German shell made into a decorative pot. Nice detail!

Container with lid made out of shell, dated 1916.

Ribbon and pin of the '4. Badisches Feld-Artillerie-Regiment Nr. 66'

Ribbon in the regimental coulours red and yellow.  The regiment saw action on the western front.

Ribbon of the '4. Badisches Feld-Artillerie-Regiment Nr. 66' 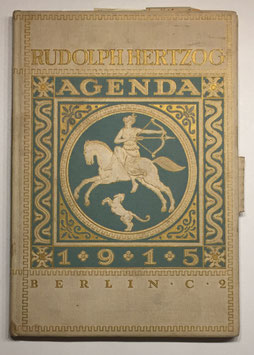 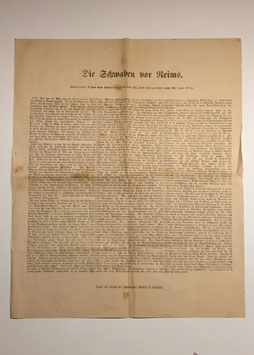 Photograph with additional postcard of a POW

Small set of a french prisoner of war which was staying in 'Lager Holzminden'.  The postcard is dated 3.2.1917.  The germans used one of their old army barracks as an POW-camp.  It was put into service in september 1917.  During one famous prisoner-escape in July 1918 29 prisoners could flee the camp.

Large wartime print of 'Maréchal Pétain'.  The drawing was used on the front page of the magazine 'L'Illustration'.

Waterpaint painting of 'Kleiner Kreuzer Königsberg'.  SMS Königsberg ("His Majesty's Ship Königsberg") was the lead ship of her class of light cruisers built by the German Kaiserliche Marine (Imperial Navy). Named after Königsberg, the capital of East Prussia, she was laid down in January 1905, launched in December of that year and completed by June 1906.

After her commissioning, Königsberg served with the High Seas Fleet's reconnaissance force. During this period, she frequently escorted Kaiser Wilhelm II's yacht on visits to foreign countries. In April 1914, the ship was sent on what was to have been a two-year deployment to German East Africa, but this was interrupted by the outbreak of World War I in August of that year. Königsberg initially attempted to raid British and French commercial traffic in the region, but only destroyed one merchant ship in the course of her career. Coal shortages hampered her ability to attack shipping. On 20 September 1914, she surprised and sank the British protected cruiser HMS Pegasus in the Battle of Zanzibar.

Königsberg then retreated into the Rufiji River to repair her engines. Before the repairs could be completed, British cruisers located Königsberg, and, unable to steam into the river to destroy her, set up a blockade. After several attempts to sink the ship during the Battle of Rufiji Delta, the British sent two monitors, Mersey and Severn, to destroy the German cruiser. On 11 July 1915, the two monitors got close enough to severely damage Königsberg, forcing her crew to scuttle the ship. Last photograph shows the ship before the war. 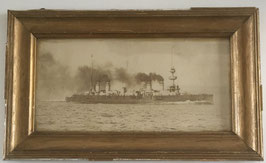 Montcalm was a Gueydon-class armoured cruiser built for the French Navy in the 1890s. The ship saw service during World War I in the Pacific. Following the war, Montcalm was used as an accommodation ship. In 1934, the vessel was renamed Trémintin and was sunk during World War II by British aircraft. Laid down by Forges et Chantiers de la Méditerranée at their La Seyne-sur-Mer shipyard on 27 September 1898, she was launched on 27 March 1900 and was commissioned on 24 March 1902, before completing her trials, to ferry the President of the Republic, Émile Loubet, to Russia. After the outbreak of World War I, Montcalm supported in the Australian capture of Rabaul in September 1914. She was decommissioned and hulked as a accommodation ship on 28 October 1926. The ship was renamed Trémintin on 26 September 1934. She was at Brest in 1940 and was there sunk by the Royal Air Force on 16 August 1944.

This small statues were made in terracotta with soil of the battlefield of 'Verdun' inside.  They were bought to honour the fallen french soldiers.

last picture is not included but for information purposes. Original item!

Print of 'Maréchal Foch', dated 1918.  The drawing was used on the front page of the magazine 'L'Illustration'.

Print of 'Général Joffre'.  The drawing was used on the front page of the magazine 'L'Illustration'. 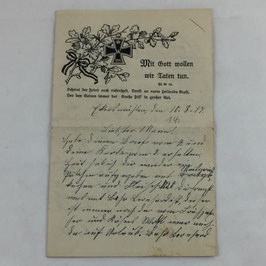 A photo-grouping of 10 pictures in an original envelope about Vimy.  Canadian and german trenches are shown.  Good condition.

Paul Ludwig Hans Anton von Beneckendorff und von Hindenburg, known generally as Paul von Hindenburg (°2/10/1847 – 2/8/1934), was a Generalfeldmarschall (field marshal) and statesman who commanded the German military during the second half of World War I before later being elected President of the Weimar Republic in 1925. 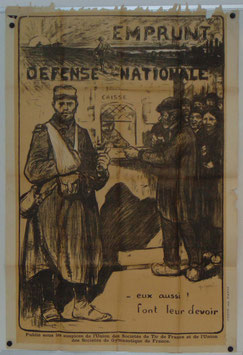 This poster was issued so that the French citizens would subscribe to a war loan. Eventually it generated 13 million French francs.  The poster was probably once glued and then removed, causing the upper edge to be damaged. There are also small cracks and folds.

The 'Diderot' was built in 1907 and put into active service in August 1911.  The ship participated in the Battle of Antivari of August 16, 1914 in the Adriatic Sea and was part of escorts of convoys in the Mediterranean during the war. The boat was dismantled in 1937.

French pocket shrine of Saint Joseph.  This kind of shrines was often used by french soldiers during the war.  Good condition.